The iridescent shark is one of the most impressive freshwater fish in the aquarium trade, but did you know these brilliant kids can grow from 3 inches to over 4 feet long at maturity? Don’t make the mistake of getting a young fish that will outgrow your tank; Here’s everything you need to know to own a giant shark!

WHAT KIND OF FISH ARE IRIDESCENT SHARKS?

Despite their shark-like appearance and massive size, iridescent sharks (Pangasianodon hypophthalmus) are actually a species of scaleless freshwater catfish in the family Pangasiidae. So why are these shy and somewhat skittish fish only recommended for advanced or experienced aquarists?

Iridescent sharks are difficult to keep in an aquarium due to their large size, high activity level, and some behavioral quirks that they exhibit in captivity. The truth is that they are a better option for heated ponds than for aquariums, and few hobbyists have tanks suitable for a single adult shark, let alone a group:

While the iridescent may not be the ideal freshwater shark for most of us, they are fascinating to watch and definitely worth aiming for, so let’s take a deeper look at these large and interesting catfish!

The iridescent catfish is one of about 30 species of pangasius sharks found in the waterways of South and Southeast Asia. Originating from the deep waters of the Mekong River and the Chao Phraya River system in Thailand, these sharks are also raised in commercial fish ponds in Vietnam and sold as a cheap source of protein:

As an aquarium export and valuable food source, iridescents have acquired quite a few nicknames, and you may see them for sale in various parts of the world as freshwater blue sharks or blue catfish , Siamese sharks, Sutchi catfish, and emperor sharks. while its meat is sold in Vietnam under the name » swai «.

In reality, we don’t know much about shark growth rates or how quickly they mature when kept in aquariums. Iridescent sharks are often started in tanks that are too small and don’t thrive, or need to be relocated when they get too big, so there aren’t many examples to follow:

LIFETIME OF THE IRIDESCENT SHARK

Iridescent sharks can live 15 to 20 years in captivity, but the sad truth is that most young fish only survive a few years due to unsuitable conditions. Overcrowded aquariums, aggressive tank mates, dirty water, and poor diets take a toll on these sensitive catfish and shorten their lifespans.

Iridescent sharks are shy and quite self-conscious, their behaviors changing as they mature. Young sharks prefer to live in groups and often go to school together for safety, which is just a beautiful sight. Once they reach adulthood, they become slightly less social and more independent.

As strong, active swimmers, sharks need plenty of open space in the middle of the tank, and will also swim to the top or scavenge their substrate for food. They are generally calm, but have an impressive startle response that can cause them to stagger towards your tank or team, so always approach slowly.

HOW TO CARE FOR YOUR IRIDESCENT SHARK TANK

The good news is that it’s not hard to keep iridescent sharks; the challenging parts are setting up a tank or pond big enough to hold them for 20 years and keeping up with weekly water changes.

The ideal setting for an Iridescent adult is not an aquarium, but a huge heated pond. However, since most of us cannot afford to put a 10,000+ gallon pond, let’s talk about how to set up a large shark tank inside your home.

If you are starting a group of young sharks, it is best to get 5 similar sized fish and start them in a tank of at least 100 gallons, or larger if you want to keep them with tank mates. Young fish are active schoolers and will dominate the environment, and crowded conditions will increase their stress.

Once your fish is about a year old or approaches 1 foot long, it’s time to upgrade. The ideal size will depend on the number of adults you have.Allow 300 gallons of capacity for the first adult and 150 more for each additional shark. For a tank with 5 iridescent sharks you will need a 900 to 1000 gallon aquarium!

THE LOCATION OF THE AQUARIUM IS FUNDAMENTAL!

Since sharks have poor eyesight and are easily startled, you’ll want to locate your tank in a quiet part of your home, away from noisy equipment and high-traffic areas. A shark tank is not a good fit for a family room or active kitchen. Always approach the tank slowly and let the fish know you are there so you don’t startle them.

It’s best to mimic the shark’s natural environment when setting up their tank, as that will reduce their potential for injury and help them feel at home. Opt for soft aquatic soil instead of aquarium sand or gravel, as this is similar to a muddy river or pond. They don’t mind really bright lights, so you can also use floating plants to shade parts of your tank.

Iridescent catfish prefer stable, warm conditions and don’t like it when their water parameters suddenly change. Sharks are easily spooked and can panic and damage submersible heaters and other internal equipment, so it’s best to use an in-line or external heater. His preferred water conditions are:

As scaleless catfish, sharks are very sensitive to water quality, preferring to swim in moderate currents. They produce a lot of waste and can quickly overwhelm an aquarium with inadequate filtration. It is best to aim for robust mechanical, chemical and biological filtration by using several systems together:

Active fish like iridescents need lots of open areas to swim and forage, and they are so big and strong that they can cause decorations to fly around the tank if loosely placed or stacked. It’s best to limit your landscaping and plants to the edges and corners of your shark tank, and leave the central areas open:

Emperor sharks are very dirty fish and with their huge appetite they produce a lot of waste. They are also very sensitive to ammonia and other toxins, as they are scaleless catfish. It’s best to do weekly 25% water changes in shark tanks, even if you have a premium filtration system.

Since you will be switching from 75 to 250 gallons per week (for 300 to 1000 gallon setups), you probably want to invest in an electric water pump and vacuum system, like those used for saltwater or reef aquariums. instead of using the classic hose and bucket method.

Iridescent sharks are omnivores and have large appetites, but prefer different foods depending on their stage of maturity. You will want to feed your sharks multiple meals a day and as much food as they can consume in 3-5 minutes. During the first year, offer your juvenile sharks meaty foods and high-protein treats:

As your shark matures into adult size (and loses teeth), switch to offering more vegetables and plant foods:

The best tank mates for these large, peaceful fish are other iridescent sharks, and the juveniles in particular prefer to be in a group of 3 to 5. Adult sharks are less social and do not go to school together, but still enjoy each other’s company. It can be tricky to match these sharks with the right friends, as they will outmatch most other fish.

Avoid keeping sharks with smaller fish like tetras and barbs, or edible snails and shrimp. Large, aggressive fish like cichlids may peck at your sharks, but they are among the best options. You will need to keep an eye on the situation and remove or relocate any problem fish.Some of the best tank mates include:

Iridescent sharks do not breed in captivity, so commercial breeders in Asia inject hormones into the fish to induce egg production and spawning in industrial ponds.Migration and seasonal changes probably play a role in the reproduction of wild sharks, but we don’t really know what triggers them to spawn naturally.

Sharks are very sensitive fish and are easily stressed, and stress can weaken their immune systems and predispose them to disease. Maintaining good water quality is important, as they cannot tolerate detectable levels of ammonia or nitrates, but that’s not the only thing to watch for:

The other downside to keeping iridescent catfish scaleless is that they are more susceptible to aquatic diseases and parasites, especially skin fungi and the protozoan that causes ich. To reduce the chance of outbreaks in your tank:

Here is a list of the basic supplies and equipment you will need to maintain a group of five adult iridescents and their tank mates. Consider installing a permanent backdrop and remember to secure the hardliner to the tank with silicone sealant or fasteners.

For setup, you will need to purchase:

To feed your sharks, you will need:

Iridescent sharks are an expensive and challenging fish best left to advanced fish keepers, but that doesn’t mean you can’t dream of setting up an amazing giant shark tank with your lottery winnings! Share your shark aspirations in the comments below, or join our online aquatic community! 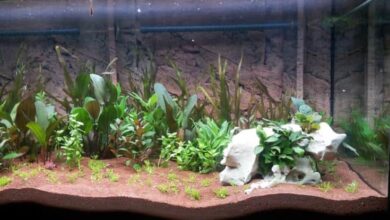 Catfish: Care guide for the aquarium 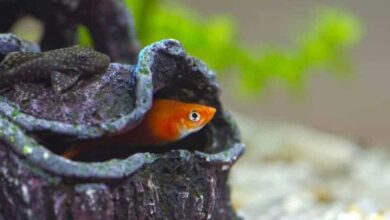 How Often Should I Feed My Betta Fish? 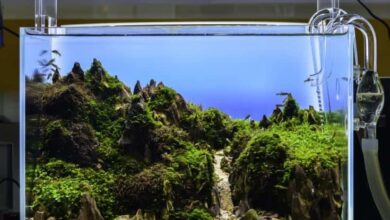